Vote now for the 2018 Network Awards

The 2018 Enterprise Europe Network Award aims to recognise outstanding Network service over the past 10 years that has led to – or is leading to – job creation and economic growth. It will also honour those inspirational entrepreneurs who are innovating and growing their businesses on an international scale with the Network’s help. Out of 35 stories submitted from across the Network, a pre-selection has narrowed the list down to 10 nominees. It's up to you now to help us select the best five that will then compete for the jury's vote! 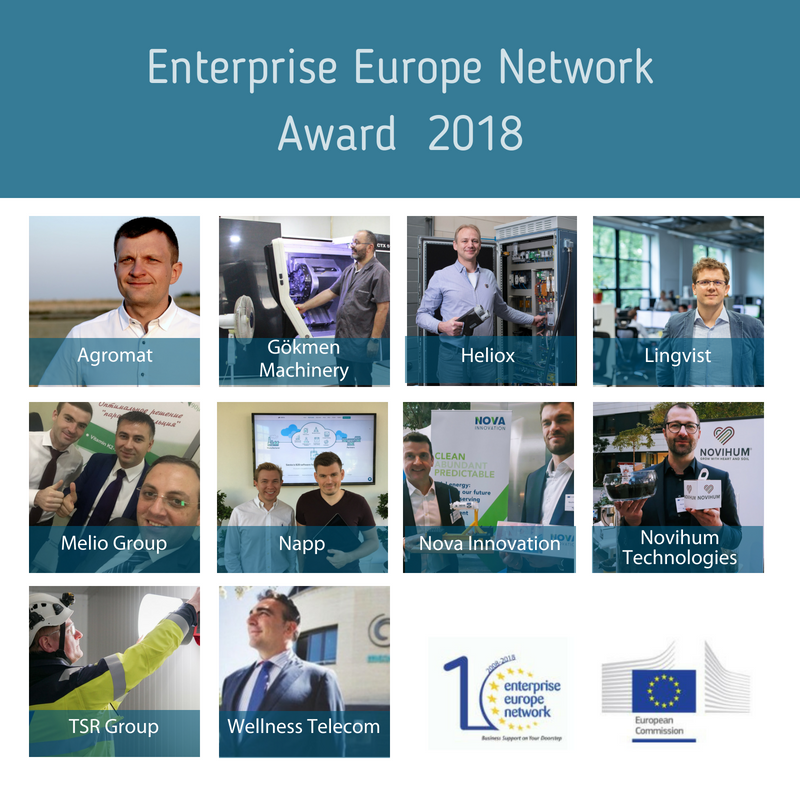 This year the Enterprise Europe Network marks its 10th anniversary. To commemorate this milestone, we will be celebrating Network excellence with a special Award for the best example of impact for an SME who has benefitted from the Network's services.

The 2018 Enterprise Europe Network Award aims to recognise outstanding Network service over the past 10 years that has led to – or is leading to – job creation and economic growth. It will also honour those inspirational entrepreneurs who are innovating and growing their businesses on an international scale with the Network’s help.

Out of 35 stories submitted from across the Network, a pre-selection has narrowed the list down to 10 nominees. It's up to you now to help us select the best five that will then compete for the official jury's final vote! The Award ceremony will take place during the Network Annual Conference in October 2018 in Vienna, Austria.

Take a look at these 10 inspiring success stories.

Seizing the international potential of the organic grain market

Founded in Poland, in 2008, BHZ Agromat set up its business importing organic grains from Eastern Europe and selling them across the EU. Agromat had a clear vision for international expansion from the beginning, but needed help to get started. Guided by the Enterprise Europe Network in Poland, Agromat started participating in matchmaking events and company missions to establish cooperation with foreign companies.

This collaboration has led to the company's international business success. With the Network's support over the past nine years, the company has increased profit by 575% and even expanded into the tourism sector, opening a guesthouse and a spa in 2013. With four full-time employees, the company has gained 50 clients from nine countries and has become the third largest organic grain trader in Poland.

As demand for organic grain increases, Agromat is looking at partnership opportunities in Slovakia, the Czech Republic and Ukraine.

Gökmen Machinery Co was established in Turkey in 1994, producing spare parts for the automotive industry. Before 2010, the company only had local clients. The Enterprise Europe Network in Turkey helped them find international business partners and develop their marketing skills.

The team in Turkey searched for business opportunities across the Network. Working with colleagues in Denmark, they helped Gökmen Machinery Co secure a deal with Gram Equipment, a leading supplier of advanced ice-cream manufacturing equipment. They now supply and develop new spare parts for its machines.

Today, this partnership represents 45% of Gökmen Machinery’s total revenue. Their annual turnover has increased from €900,000 to €2 million while the number of employees has doubled, and 16 new people have been employed. This success has opened the door to new international business deals, reaching an export share of 55% and increasing production facilities from 500m2 to 3,000m2.

Heliox B.V., a Dutch SME founded in 2009, has developed a super-fast charging system for electric buses. Its innovative system can charge an electric bus in two to five minutes. This opens the door to a zero-emission and 24/7 public transport system powered entirely by renewables.

Despite successful pilot schemes, Heliox struggled to convince public authorities to adapt their fleets. They needed to bring costs down and find early adopters of their green transport solution.

The Enterprise Europe Network in the Netherlands helped secure €1.5 million in funding from the EU’s SME Instrument programme. Supported by business coaches, they were able to develop a strategy to expand into European markets. They are now operational in Finland, Luxembourg, France, Denmark, the Netherlands and Germany and are exploring opportunities in the US, Singapore, Australia and New Zealand.

Cooperation with the Network has led to an increase of employees from 18 to 50 and an increase in turnover from €7 to €16 million.

Lingvist ÖU is a language-learning app with a difference. It takes into account the existing knowledge of the learner, maps the learner’s memory and decides in real time, what the person should learn next. To boost its growth, Lingvist needed financing.

The Enterprise Europe Network in Estonia helped Lingvist secure €1.6 million from the EU’s SME Instrument programme. This was the start of the Lingvist’s success story. With the Network’s support, the company built a viable international commercialisation strategy and was able to launch the app worldwide.

One million people around the globe have already sped up their language learning with Lingvist, which now offers 16 languages. The company has created 40 new jobs and attracted an additional €7.2 million in private investment. It has established partnerships with the biggest Taiwanese and Japanese e-commerce companies and become an internal language-learning programme for one of the biggest Japanese internet companies, Rakuten.

Melio Group LLS was established as a distribution company in 2012 focusing mainly on high quality inexpensive food supplements and medicine. Melio Group turned to the Enterprise Europe Network in Armenia in 2015 to develop a market strategy, promote new products in the pharmaceutical market and to expand their distribution capability.

Working in collaboration with Network counterparts, the team in Armenia was able to identify food supplement producers in the EU and beyond to work with Melio Group. The company has already signed five business deals with Latvian, Norwegian and Czech companies.

The Network has helped transform Melio Group’s business. The company has grown from two to seven employees. They are currently negotiating with potential partners that could lead to a sixth successful international partnership.

The successful collaboration between the Enterprise Europe Network in Denmark and Napp started in 2015. The Network helped Napp to find resellers and development partners from Spain and Poland. It then put the company in contact with finance experts who helped them identify potential investors. In 2017, Napp received a seven-figure capital investment from the Danish investment fund Promentum Equity Partners.

With a growth rate of 60% a year, Napp has expanded from six to 30 employees and is selling in 37 different countries worldwide. It is already working with big international corporates and is expanding into several new markets.

Founded in 2010, Nova Innovation Ltd. is a world leader in tidal turbine technology and project development. In 2014, Nova installed the world’s first community-owned tidal turbine. In 2016, they deployed two prototype, grid-connected turbines off the Shetland Islands with a further device deployed in 2017 – the world’s first tidal energy array. The Enterprise Europe Network in Scotland has supported the company at key points of its development.

The Network helped secure €20 million funding. A partnership with the Belgian renewables investment company ELSA paved the way for a further £1.8 million investment from the Scottish Government. They also secured €2.25 million funding from the EU's SME Instrument enabling them to reduce the lifetime cost of tidal power by 20%.

Nova is now coordinating a €20.2 million EU Horizon 2020 flagship project to make tidal a more competitive renewable energy option. The company has doubled turnover year on year and grown from three to 37 employees.

Founded in 2012, Novihum Technologies GmbH offers natural soil-improving products that help farmers and gardeners to improve quality and yield or to recultivate their land.

Novihum started working with the Enterprise Europe Network in Germany in 2014, to find a partner company in the Netherlands. In parallel, the company received advice on access to finance, securing more than €2 million funding by the EU’s SME Instrument. The funding provided for more than 50% of the costs of construction of a pilot plant in Dortmund and enabled the team to grow from seven to 25 employees in 2018.

The global potential of Novihum Technologies has attracted private and public investors in Germany and the United States. The first industrial-scale production plant with a capacity of at least 10,000 tones per year is planned for 2019-2020. Expansion to additional production facilities to serve regional and global markets is planned from 2020.

TSR Group Oy is a Finnish company established in 2007. The company manufactures robust LED lighting products and electrical appliances to be used on construction sites. Clients include construction machinery rental companies, construction companies and retailers. For its first 10 years, the company only operated on the Finnish market.

The Enterprise Europe Network in Finland has since provided the company with support to reach partners and customers outside of Finland, introducing the Finnish company to potential international clients. TSR Group started with distributors in Belgium and Germany. Today, the company exports to 12 countries.

This internationalisation strategy has led to rapid growth. In 2017, the company’s turnover reached €4.1 million, compared to €1.2 million in 2015. The forecast for 2018 is €5 million. The company now employs 19 people.

Spanish technology and telecommunication company Wellness Telecom, was established in 2008. It specialises in new technologies for telecommunications. It offers services from design to maintenance and support in: cybersecurity, big data and analytics, communication and smart cities solutions.

The Enterprise Europe Network in Spain has been advising Wellness Telecom since 2008 on access to finance, new markets and potential partners. In 2015, Wellness Telecom received over €1.5 million from the EU's Horizon 2020 research programme expanding its services to over 100 clients worldwide including two big corporates. Wellness Telecom is also developing energy saving and waste management projects. The company’s smart street lighting project for the Spanish municipality Gandía is valued at more than €34 billion.

From its first days during the economic crises, Wellness Telecom has grown from four to over 100 employees and has doubled its revenue reaching €7 million in 2014.